Behind Closed Doors: The Alarming Effects on Children who Witness Domestic Violence 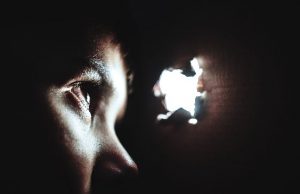 This true story is shared with permission. It chronicles the life of a young lady who had no idea she was experiencing domestic violence, let alone how insidiously the effects would affect every future decision she would make. Having witnessed domestic violence from her family of origin, she thought that all families had visits from the police daily. She thought shouting and chaos and not feeling safe was normal. She thought that all parents used broken bottles to defend themselves. When she’d frequently see one parent standing at the front door to their home, spread-eagled in front of the door preventing the other from leaving the house, she thought that there had to be a logical reason. As her body grew physically and she emotionally matured abnormally, she found that this behavior was not normal. Was it too late for her?

Rena was 11 when her parents divorced. After one terrifying episode where she and her sister sat on either side of their parents, frightened, as one parent straddled the other, what occurred next was where her lapse in memory occurred. She says that there were black holes in her memory during this chaotic and murky time in her life. She now realizes that the black holes were defense mechanisms. “I had to survive,” she said. Sadly, the next thing she remembered is the new apartment she, her mom, and brother moved to. She doesn’t remember packing her clothes or the moving van. She doesn’t remember how long it was in-between the straddle-fight and her Mom looking for an apartment. She doesn’t even remember enrolling in a new school. “It’s all gone. That timeframe is gone, and I don’t remember any of it,” she said.

Still a “child” emotionally, Rena had trouble adjusting to the facets of her new life. She loved her Dad but lived with her Mom. Who were these new kids she was supposed to get to know at her new school? Who was the boy who pushed her to the ground and punched her in the nose as the crowd shouted their approval? She kept wondering if she caused her parents to fight, scream, and push each other around because of something she did.

Subsequently, she began to go “inside of herself” more often. She’d sit for hours on her bed feeling like she was losing her mind. There were no hugs or bed-time stories or “it’s going to be alright” forthcoming. In her adolescent mind, it was her against the world—but wait— “How do I do this? How do I take care of myself?”

Both of her parents were in their own worlds, and Rena was in hers…alone. “It was like being in a crowd of people and feeling completely alone,” she said. Life got so ugly for Rena, her mom yelling at her, the new kids bullying her, not seeing her Dad…it was all too much. Everything began to go in slow motion. She found herself in the bathroom, opening the medicine cabinet, picking up and opening the bottle of Excedrin, dumping a handful of the pills into her hand, filling a glass with water,  putting the pills and water in her mouth—tossing her head back—swallowing.  She laid on the floor and waited to die.

Rena awakened to, “Fool, she tried to kill herself again.” And, “Hey are you alright?” Rena’s Mom called her a fool and her brother wanted to know if she was alright. Fortunately, Rena lived though she was in such pain that she wished she had not. Fortunately, her brother came home just in time.

When one has no idea of how to cope with the unfamiliar, they often want to give up. They just want the pain to stop.  Rena…well, she kept going. Thank God. She didn’t have any counseling. It may have helped. She was still left to her own devices.

All too often we let the rejections and pain of our past dictate our future choices.

When Rena turned 16, she started dating. Oh boy. She had no idea what she was doing. He was the first “real” boyfriend she had. Daily after school, he’d wait for her in his shiny white car to take her home. “He must like me,” she thought. Just happy that someone felt she was “worth” paying attention to. Months and months passed before she met his parents. That’s when she found out that he too was enmeshed in domestic violence through his family of origin. Could it be that they, unknowingly, gravitated to what was familiar in their lives?

By 18, they were married and by 21 she was pregnant. Three times during her pregnancy he told her to get out of “his” house. He yelled and cursed at her and she repaid him in kind. Disaster. Was their son destined to their same fate?

Years later, Rena remarried. This marriage was her last marriage on steroids, but not her last marriage. He wanted to get married quickly, she was honored. Her son would have a stable family environment. Wrong. She found that out when his mother had to pull him off her, you get it, as he straddled her on the floor demanding that she do what he said. Isn’t that what she experienced as a child with her parents? With her new husband, she experienced physical, mental, emotional, sexual, financial, and spiritual abuse. Unfortunately, her son experienced all those unstable changes with Rena.

Of course, her son experienced the same horrible abusive relationships, except he was the victim.

Consistent exposure to or witnessing of domestic violence has major psychological effects on the undeveloped mind of a child. The effects can include excessive sadness, guilt, inability to experience empathy or guilt, fear of abandonment, cognitive dissonance, habitual lying, emotional distancing, poor judgment.  The memories imprinted onto a child’s mind become inextricably linked together and forever taint—or else filter—feelings, beliefs, and choices in relationships and so many other facets of life. These children are not merely innocent bystanders. They are victims.

The parents may have no idea what they are doing when they consistently place their child in a climate of chronic emotional volatility. This behavior lends itself to painful and isolating emotions and frequently unmet needs for affection and attachment.

The Adverse Childhood Experiences (ACE) study led by the Centers for Disease Control and Prevention has classified exposure to DV as one of several adverse childhood experiences contributing to poor quality of life, premature death, and risk factors for many of the most common causes of death in the United States. There are countless children who witness domestic violence between their parents. There are also many detrimental consequences to innocent lives.